The German Football League (GFL) and the Canadian Football League (CFL) entered into a cooperation early this year and have agreed to intensify their joint initiatives in the near future. At a meeting in Toronto, CFL commissioner Randy Ambrosie, AFVD president Robert Huber and GFL spokesperson Carsten Dalkowski discussed details on the next steps with leading management personnel of Canadian professional football. Together with the CFL Commissioner the AFVD delegation also visited on invitation of Hamilton Tiger-Cats President Scott Mitchell the game between the two CFL division leaders Hamilton Tiger-Cats and Winnipeg Blue Bombers upon invitation by Tiger-Cats team president Scott Mitchell.

Winnipeg’s team currently has one of the two German CFL players, Thiadric Hansen, on its roster. In addition to Hansen Max Zimmermann is currently under contract in the CFL with the Saskatchewan Roughriders. As part of the cooperation between the two leagues, both had earned their roster spots during the CFL combine against strong international competition. One of the topics on the agenda in Toronto was how to pave the way for more German players into the CFL: Plans are to hold a major try-out in Germany in January to select qualified players for the next CFL combine in February. So players able to make it into a CFL roster will have significantly more time to prepare for the 2020 combine and will be evaluated close to their home in Germany before sent on the trip to Canada.

The leagues are also set to regulate player transfers from GFL and AFVD into CFL as well as vice versa from CFL to GFL. For players who leave GFL teams for the CFL, the Canadian league is honoring the efforts of German clubs and the federation and will reimburse expenses for educating and training these players by a fixed transfer fee in every single case. In return, CFL teams will have the opportunity to send Canadian players originally hired in the CFL draft to German teams to further evaluate their abilities. Such players could then be exempted from roster and on-field limits for Canadian players in GFL regulations.

It was also discussed that the mutual exchange shall not be limited to players alone. Over the medium term the leagues will introduce a variety of exchange programs also for coaches, referees, medical staff or other officials. CFL has also offered to assist GFL in respect to TV or Livestream productions, marketing and public relations as well as sponsorship activities. Canadian expertise shall also be used to further strengthen the GFL in areas of  football operations – such as scouting, game analysis, event organization, statistics and much more.

The Canadian Football League with its final game for the Grey Cup upholds the longest tradition of a national championship in American football worldwide. This year’s Grey Cup will be the 107th edition of the game. The German Football League emerged from the roots of the first German Bundesliga in 1979. Its 41st final match German Bowl XLI on October 12 in the Commerzbank-Arena at Frankfurt will continue the longest tradition of an American football event in Europe. Both partners are willing to build on their strong tradition and further accelerate the growth of global American football. 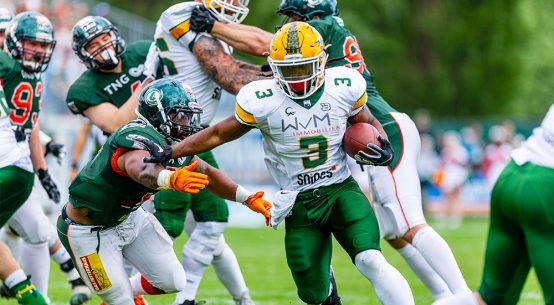